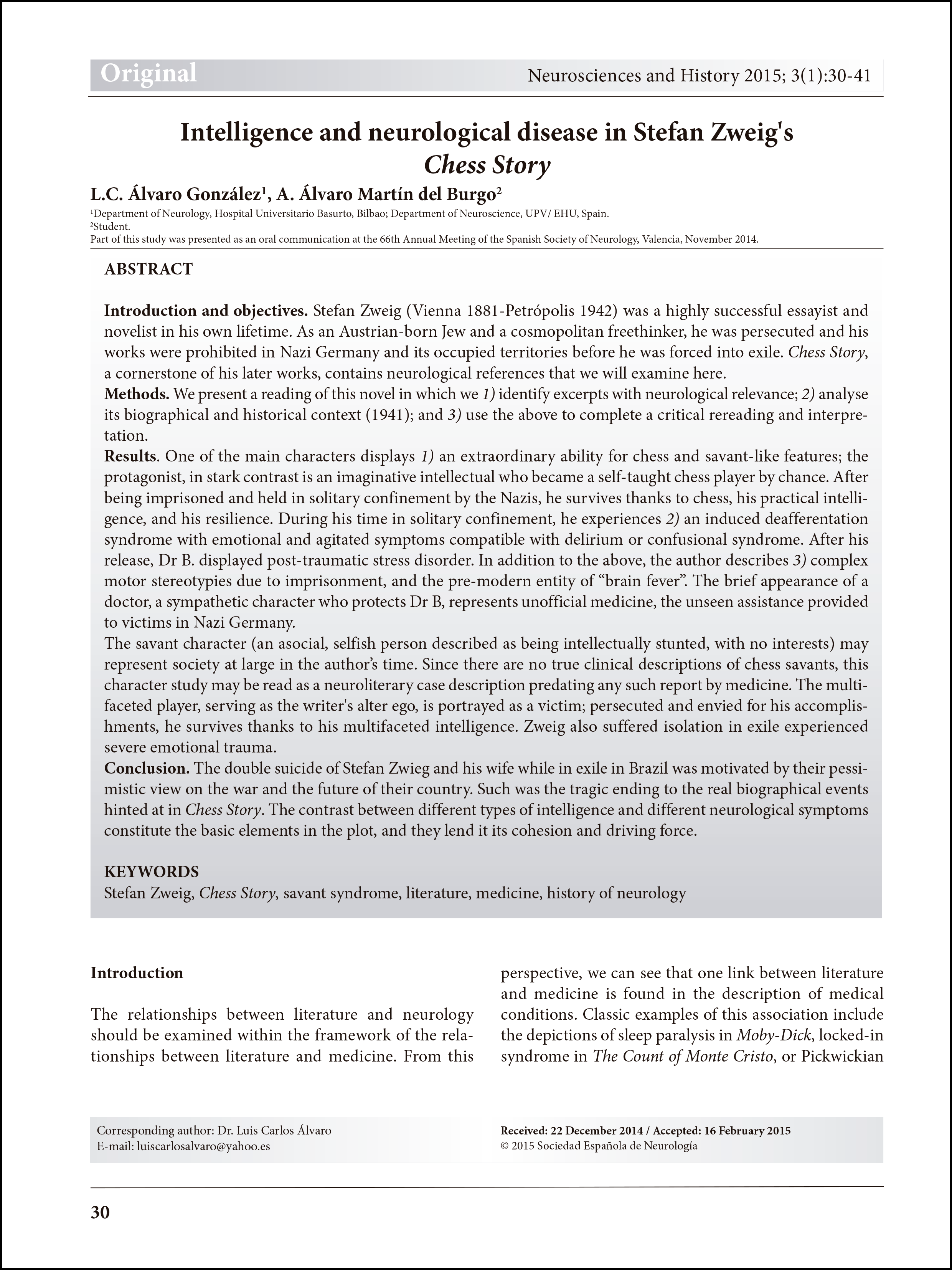 Introduction and objectives. Stefan Zweig (Vienna 1881-Petrópolis 1942) was a highly successful essayist and novelist in his own lifetime. As an Austrian-born Jew and a cosmopolitan freethinker, he was persecuted and his works were prohibited in Nazi Germany and its occupied territories before he was forced into exile. Chess Story, a cornerstone of his later works, contains neurological references that we will examine here.

Methods. We present a reading of this novel in which we 1) identify excerpts with neurological relevance; 2) analyse its biographical and historical context (1941); and 3) use the above to complete a critical rereading and interpretation.

Results. One of the main characters displays 1) an extraordinary ability for chess and savant-like features; the protagonist, in stark contrast is an imaginative intellectual who became a self-taught chess player by chance. After being imprisoned and held in solitary confinement by the Nazis, he survives thanks to chess, his practical intelligence, and his resilience. During his time in solitary confinement, he experiences 2) an induced deafferentation syndrome with emotional and agitated symptoms compatible with delirium or confusional syndrome. After his release, Dr B. displayed post-traumatic stress disorder. In addition to the above, the author describes 3) complex motor stereotypies due to imprisonment, and the pre-modern entity of “brain fever”. The brief appearance of a doctor, a sympathetic character who protects Dr B, represents unofficial medicine, the unseen assistance provided to victims in Nazi Germany.
The savant character (an asocial, selfish person described as being intellectually stunted, with no interests) may represent society at large in the author’s time. Since there are no true clinical descriptions of chess savants, this character study may be read as a neuroliterary case description predating any such report by medicine. The multifaceted player, serving as the writer's alter ego, is portrayed as a victim; persecuted and envied for his accomplishments, he survives thanks to his multifaceted intelligence. Zweig also suffered isolation in exile experienced
severe emotional trauma.

Conclusion. The double suicide of Stefan Zwieg and his wife while in exile in Brazil was motivated by their pessimistic view on the war and the future of their country. Such was the tragic ending to the real biographical events hinted at in Chess Story. The contrast between different types of intelligence and different neurological symptoms constitute the basic elements in the plot, and they lend it its cohesion and driving force.