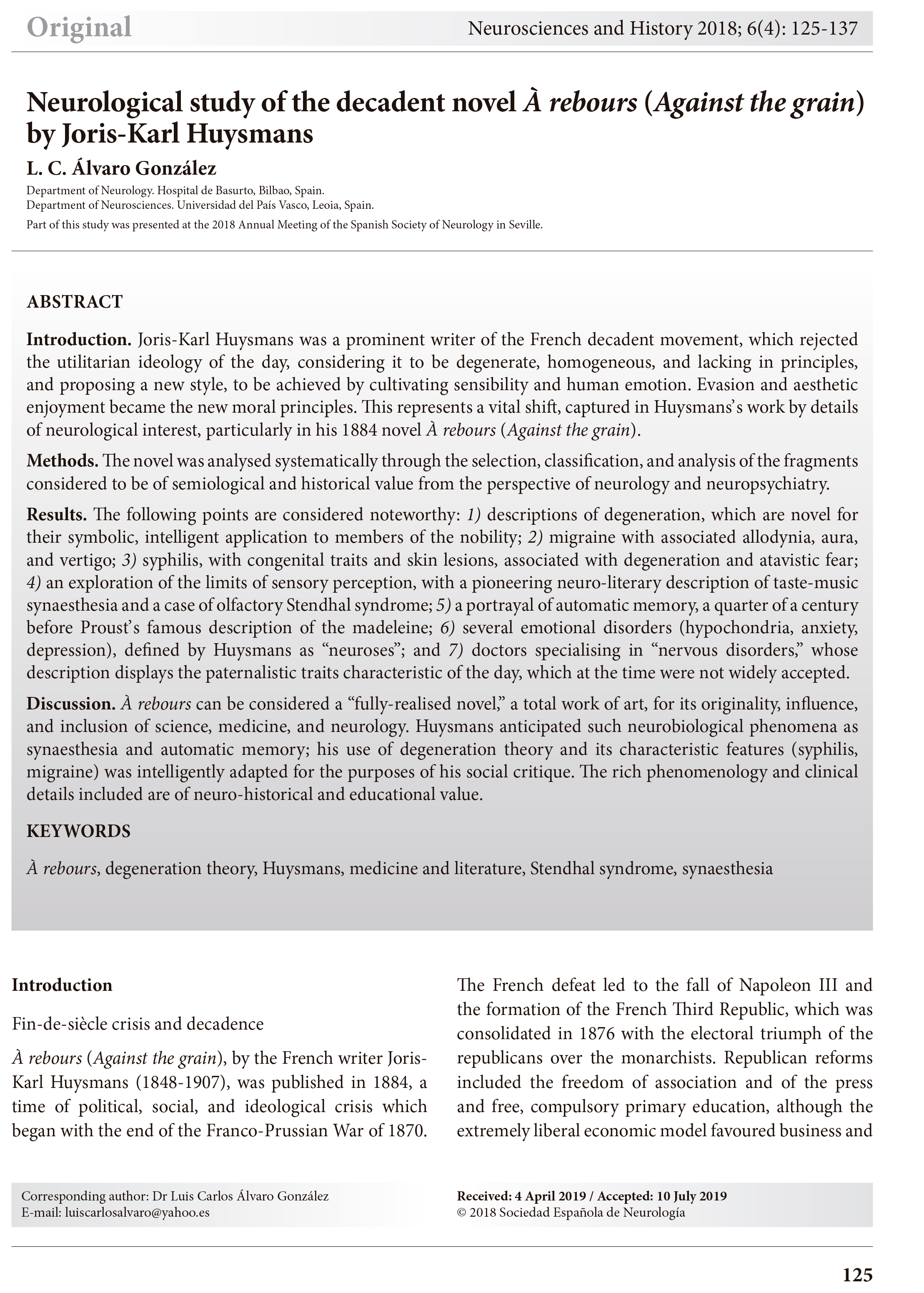 Introduction. Joris-Karl Huysmans was a prominent writer of the French decadent movement, which rejected the utilitarian ideology of the day, considering it to be degenerate, homogeneous, and lacking in principles, and proposing a new style, to be achieved by cultivating sensibility and human emotion. Evasion and aesthetic enjoyment became the new moral principles. This represents a vital shift, captured in Huysmans’s work by details of neurological interest, particularly in his 1884 novel À rebours (Against the grain).

Methods. The novel was analysed systematically through the selection, classification, and analysis of the fragments considered to be of semiological and historical value from the perspective of neurology and neuropsychiatry.

Results. The following points are considered noteworthy: 1) descriptions of degeneration, which are novel for their symbolic, intelligent application to members of the nobility; 2) migraine with associated allodynia, aura, and vertigo; 3) syphilis, with congenital traits and skin lesions, associated with degeneration and atavistic fear; 4) an exploration of the limits of sensory perception, with a pioneering neuro-literary description of taste-music synaesthesia and a case of olfactory Stendhal syndrome; 5) a portrayal of automatic memory, a quarter of a century before Proust’s famous description of the madeleine; 6) several emotional disorders (hypochondria, anxiety, depression), defined by Huysmans as “neuroses”; and 7) doctors specialising in “nervous disorders,” whose description displays the paternalistic traits characteristic of the day, which at the time were not widely accepted.

Discussion. À rebours can be considered a “fully-realised novel,” a total work of art, for its originality, influence, and inclusion of science, medicine, and neurology. Huysmans anticipated such neurobiological phenomena as synaesthesia and automatic memory; his use of degeneration theory and its characteristic features (syphilis, migraine) was intelligently adapted for the purposes of his social critique. The rich phenomenology and clinical details included are of neuro-historical and educational value.