Epilepsia partialis continua: past and present 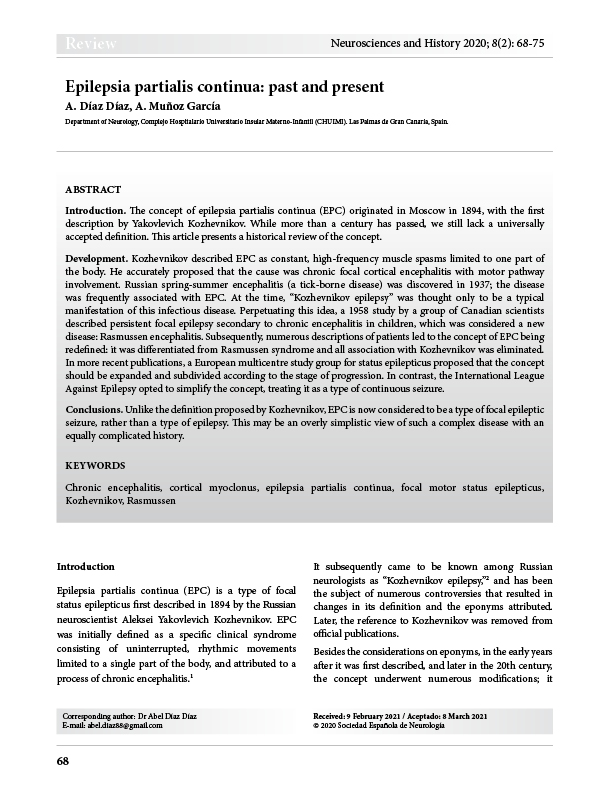 Introduction. The concept of epilepsia partialis continua (EPC) originated in Moscow in 1894, with the first description by Yakovlevich Kozhevnikov. While more than a century has passed, we still lack a universally accepted definition. This article presents a historical review of the concept.

Development. Kozhevnikov described EPC as constant, high-frequency muscle spasms limited to one part of the body. He accurately proposed that the cause was chronic focal cortical encephalitis with motor pathway involvement. Russian spring-summer encephalitis (a tick-borne disease) was discovered in 1937; the disease was frequently associated with EPC. At the time, “Kozhevnikov epilepsy” was thought only to be a typical manifestation of this infectious disease. Perpetuating this idea, a 1958 study by a group of Canadian scientists described persistent focal epilepsy secondary to chronic encephalitis in children, which was considered a new disease: Rasmussen encephalitis. Subsequently, numerous descriptions of patients led to the concept of EPC being redefined: it was differentiated from Rasmussen syndrome and all association with Kozhevnikov was eliminated. In more recent publications, a European multicentre study group for status epilepticus proposed that the concept should be expanded and subdivided according to the stage of progression. In contrast, the International League Against Epilepsy opted to simplify the concept, treating it as a type of continuous seizure.

Conclusions. Unlike the definition proposed by Kozhevnikov, EPC is now considered to be a type of focal epileptic seizure, rather than a type of epilepsy. This may be an overly simplistic view of such a complex disease with an equally complicated history.