Nicolás Achúcarro and the histopathology of rabies: a historical invitation from Nissl and Alzheimer 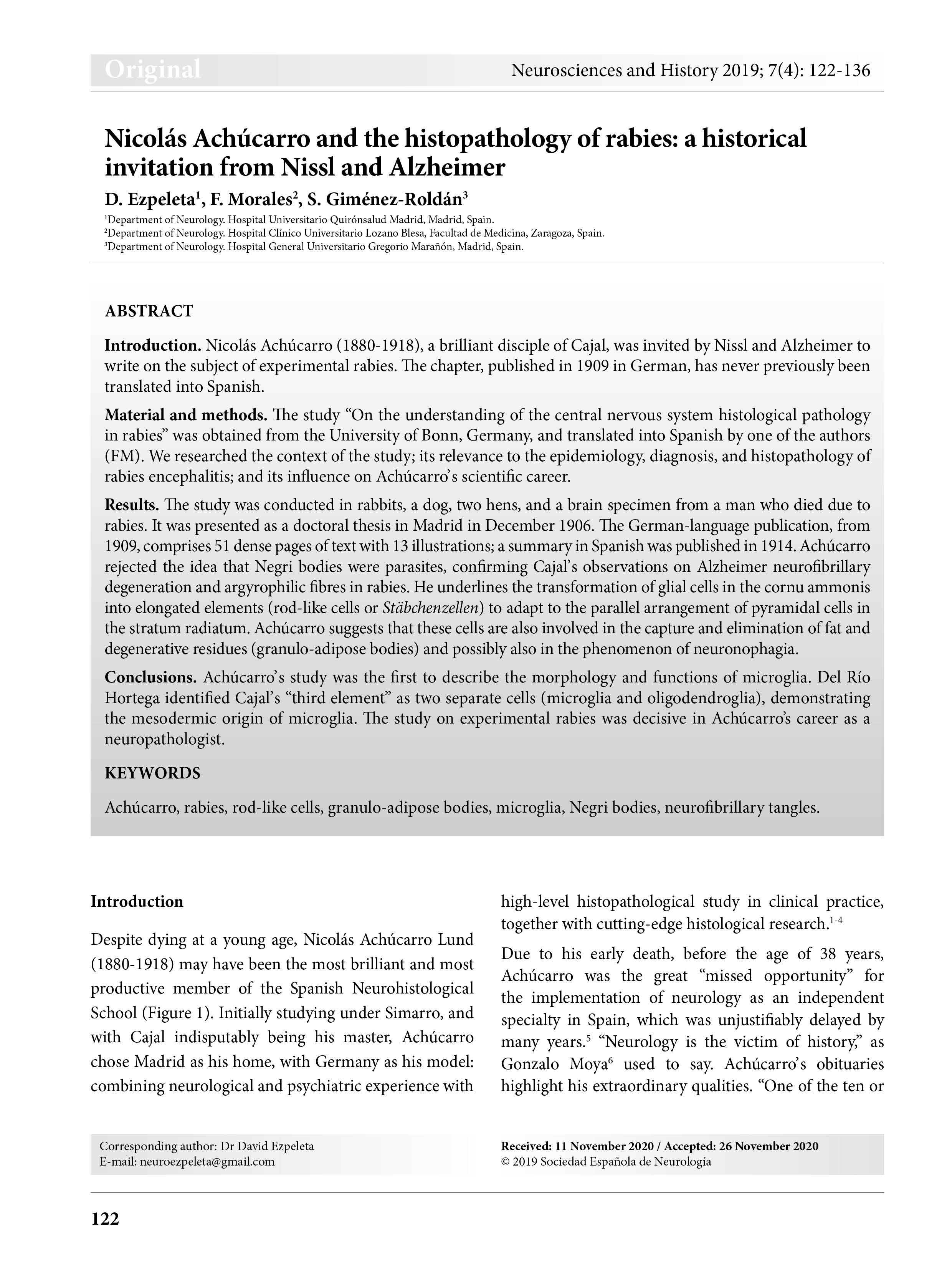 Introduction. Nicolás Achúcarro (1880-1918), a brilliant disciple of Cajal, was invited by Nissl and Alzheimer to write on the subject of experimental rabies. The chapter, published in 1909 in German, has never previously been translated into Spanish.

Material and methods. The study “On the understanding of the central nervous system histological pathology in rabies” was obtained from the University of Bonn, Germany, and translated into Spanish by one of the authors (FM). We researched the context of the study; its relevance to the epidemiology, diagnosis, and histopathology of rabies encephalitis; and its influence on Achúcarro’s scientific career.

Results. The study was conducted in rabbits, a dog, two hens, and a brain specimen from a man who died due to rabies. It was presented as a doctoral thesis in Madrid in December 1906. The German-language publication, from 1909, comprises 51 dense pages of text with 13 illustrations; a summary in Spanish was published in 1914. Achúcarro rejected the idea that Negri bodies were parasites, confirming Cajal’s observations on Alzheimer neurofibrillary degeneration and argyrophilic fibres in rabies. He underlines the transformation of glial cells in the cornu ammonis into elongated elements (rod-like cells or Stäbchenzellen) to adapt to the parallel arrangement of pyramidal cells in the stratum radiatum. Achúcarro suggests that these cells are also involved in the capture and elimination of fat and degenerative residues (granulo-adipose bodies) and possibly also in the phenomenon of neuronophagia.

Conclusions. Achúcarro’s study was the first to describe the morphology and functions of microglia. Del Río Hortega identified Cajal’s “third element” as two separate cells (microglia and oligodendroglia), demonstrating the mesodermic origin of microglia. The study on experimental rabies was decisive in Achúcarro’s career as a neuropathologist.